Global stock markets experienced their sharpest corrections on record in the last week of February as panic about the spread of the coronavirus to the US derailed investors who had remained remarkably upbeat in the face of the spread of the deadly flu.

The US blue-chip benchmark, the Dow Jones Industrial Average, fell more than 1000 points in two out of five trading sessions that week and, by the end of the week, had slumped 12%, with the broader-based S&P500 Index coming off 11%.

The panic that set in was a stark contrast to the upbeat investor sentiment that sent US stock markets to new record highs just two weeks before. Other international developed market indices experienced similar declines. For the month as a whole, the Dow Jones Industrial Average fell 9.8%, the S&P 500 8.2%, the Canadian S&P/TSX Composite Index 6.1%, Japan’s Nikkei Index 8.8% and the Eurostoxx 50 fell 8.4%.

China’s stock market remained surprisingly resilient, given that the world’s second-largest economy is at the epicentre of the outbreak. The Shanghai Shenzhen CSI300 Index declined a mere 1.4% during the last week of February compared with the close to 10% equity market declines in the major developed countries. The stock market’s relative outperformance can be attributed to investors taking encouragement from the government’s quick and far-reaching response to preventing the further spread of the virus. Also, the stimulatory policy measures put in place to alleviate the impact of the virus on the Chinese economy have been significant.

Investors head of the safety of safe havens

On the whole, however, investors fled into the safety of US treasuries, which prompted benchmark yields to decline to levels never seen before. The 10-year Treasury yield broke below 1% during the late February correction and went on to drop to a historic low of 0.66%, before rising back to 0.74%. The 30-year Treasury yield fell to a record low of 1.20%

Commodities were particularly hard hit, with the Bloomberg Commodity Index falling 7.5% after reaching a high on February 19. Oil prices declined on intensifying concerns about weaker global demand. The West Texas Intermediate (WTI) fell below $45 a barrel by the end of February and Brent crude oil prices to about $50 from their high points of $63.27 and $68.91 a barrel respectively this year. Copper prices experienced the most extended period of daily declines in history, coming off for 14 days consecutively.

Gold, traditionally one of the most sought after safe havens, was also caught in the crossfire as traders sold the precious metal to raise cash to provide a cushion in tumultuous financial market conditions. The spot gold price fell 3.6% from $1 645 an ounce to $1 585 but has since recovered to above $1 650 again.

The trigger for the painful correction was confirmation that the coronavirus was spreading more rapidly than expected, with news of the first death in US and the first sub-Saharan African case in Nigeria. The coronavirus has highlighted the risks of contagion in a world so globally interlinked through travel, food distribution, energy, and financial systems.

However, governments of the world’s biggest countries were quick to commit to putting in place coordinated fiscal and monetary responses to the most significant financial market correction since the 2008 financial crisis. In the first week of March, the G7 scheduled a call between all seven country members to discuss the situation going forward. But little, other than vocal support for coordinated responses came from the call. Just hours later, the US Federal Reserve took the unilateral decision to go ahead with a 50-basis point cut in the Fed Funds target rate instead of waiting for its March meeting to move. The Bank of Canada followed with a matching 50 basis point decline in the target for the overnight rate to 1.25% from 1.75%.

The positive financial market response to the emergency cuts was short-lived, and stock markets have since experienced several extreme daily moves up and down. The Fed’s failure to bring calm to the markets highlights the skepticism that prevails about how effective expansive monetary policy is likely to be in combatting the supply and, increasingly, demand shocks that are a result of the coronavirus.

Although the February correction is equal in proportion to the 2008 financial crisis, it is worth remembering that it is not a financial crisis and, as the Bank of International Settlements points out, while coronavirus uncertainty rules, markets are still functioning. Financial intermediation, which broke down in the previous crisis, has proved resilient.

For some time, there has been speculation about whether the 12-year long bull market was nearing its end. However, the stock markets have continued to achieve new record highs as a result of the significant central bank stimulus that has underpinned investor sentiment and liquidity since 2008. According to CNBC, “Central banks cut borrowing rates more than 50 times over the past decade and instituted “money printing” quantitative easing (QE) programs to the tune of nearly $11 trillion just between the Fed, the European Central Bank and the Bank of Japan.”

Against this exceptionally easy monetary backdrop, investors have been pouring into the market and contributing to speculative excesses. They have been buying unprofitable companies, which has translated into sky-high valuations in many cases.

As a result, the S&P500 has almost quadrupled from its March 2009 lows and is trading at 17.8 times forward earnings, which is above the 10-year average of Before the late February sell-off, the S&P500 was at its most expensive level since 2002.

The big tech stocks, namely the FAANGs and Microsoft, have been significant beneficiaries of the bullish investor sentiment and have been mostly responsible for propelling the US stock markets to new highs. They now account for a meaningful proportion – about one fifth – of the market capitalization of the US stock market indices. The graph below shows how much the shares have gained since 2010. 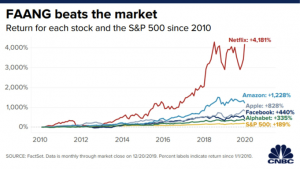 Yardeni Research calculates the latest FANG forward price/earnings (P/E) ratio to be 45.2 times as of March 6. This measure excludes Apple and Microsoft but gives a good indication of the elevated valuations at which these big tech stocks are currently trading. Facebook is trading at a P/E of 19 times, Amazon at 60.2, Netflix at 55.9 and Google (Alphabet) at 23.2. In terms of relative performance, the FANG stocks have increased 650.8% since December 21, 2012 compared with the S&P 500’s 58.6% advance.

The liquidity that has been pumped into the system, and ultra-low interest rates, have also seen corporate and household debt mount, raising concerns that stimulatory monetary policy could be laying the ground for untenable levels of company and individual debt.

Non-financial US corporate debt has grown to double the level it was during the crisis, and total household debt exceeds the 2008 levels. Historically low interest rates have meant that debt servicing levels have fallen into single-digit territory, their lowest levels since 1980. However, if interest rates do begin to rise, the high levels of corporate and consumer debt could well prove unsustainable.

The aforementioned fundamental reasons explain why the financial markets may have been frothy and overvalued, and already vulnerable to a selloff. However, the sequence of events that ultimately brought the bull down was nowhere near investors’ radar screens.

Many less optimistic market participants have warned that the wheels would eventually come off this wagon and for a good reason. But those investors who stayed out of the market for the last few years have ended up missing out on a phenomenally good run-up in returns.

Meanwhile, those who watched the raging bull market from the sides and were tempted to go all-in at the recent stock market peaks would have experienced all the pain of the market’s unravelling over the past couple of weeks and none of the rewards of the 12-year rally that preceded them.

However, there is another investor, namely the one who has remained invested all along, reaping the benefits of the unprecedented bull market, while tolerating the occasional, admittedly unnerving, bouts of volatility, including the sharp downturn experienced recently. For this investor, the debate is not about whether to get in or out of the market – or to try to time the market, which is inevitably a fruitless endeavour. Instead, their focus is on establishing and sticking to a disciplined investment process that guides them through the tough times; keeping their investment intact through all types of market conditions and business cycles.

Volatile investment climates that are characterized by panic selling, like the one we are currently experiencing, are understandably challenging. But they do provide opportunities to set you up for long-term investment success. The only way to achieve this is by buying assets at a discount, regardless of how unsettling the market conditions may be on your nerves.

I’m not sure what conversation we’ll be having 12 months from now. But there’s a good chance that it will be about something entirely different, whether positive or negative for financial markets. I don’t like to make predictions, but I do believe there is a low probability that the world will come to an end over the next year or two as a result of the coronavirus. The virus will likely still be with us for some time, and we’ll have to learn how to live with it. I’m not suggesting complacency, but I’m merely saying we are a resilient species, and the panic that has taken hold is likely to prove an overreaction to the actual risks involved.

Speculative excesses have undoubtedly built up in the financial system, and risks lie ahead. The solutions that were once available to generate income and stabilize the wealth of retirees are no longer tenable because bond yields are at all-time lows, and some are even negative. The yield on the 30-year US Treasury bond is below the yield of the S&P 500 Index. Moreover, many developed world countries are facing ageing and shrinking populations.

All of these factors are bound to impact your retirement investment options. But you still need to grow your nest egg. So, regardless of the volatile nature of equities, more investors will require exposure to stock markets simply because there aren’t many compelling investment alternatives. Therefore, the question is not whether to remain invested in the financial markets, but how to best participate to meet the financial demands of your unique retirement situation.

We’ve been here before. The outbreak of SARS and swine flu triggered similar levels of panic and prompted the same apocalyptic prognoses about the future of the world and financial markets. However, the invisible hand of the markets has always found a way to adjust to shifting macro-economic dynamics and has always emerged to fight another day. Having this idea in mind, along with a disciplined investment process, will help safeguard your future prosperity.