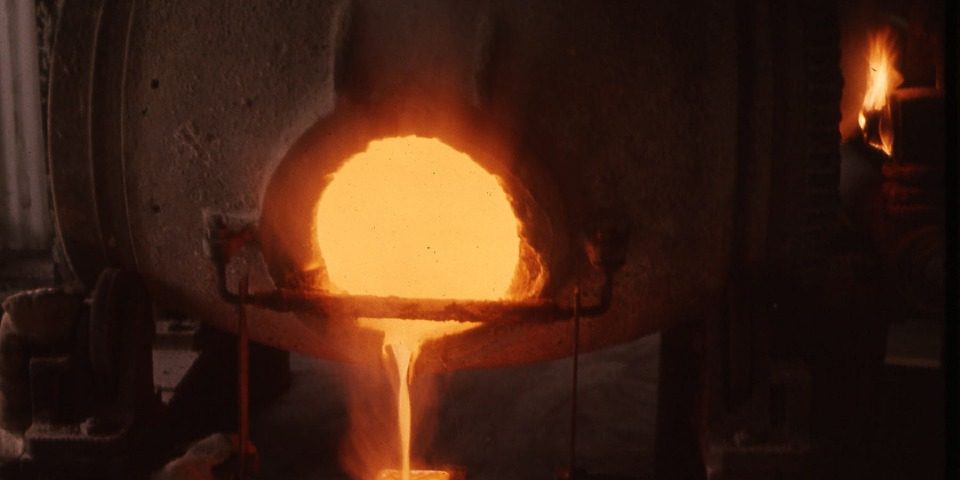 The onset of the COVID-19 pandemic made it a tumultuous six months for commodities, with only the precious metals, gold, and silver, putting in a positive performance as investors took shelter from the economic fallout of worldwide lockdowns.

As country after country shut down their economies to prevent the further spread of the coronavirus, demand for commodities fell off a cliff, with some worst hit than others. The divergence between the top and bottom performers was unusually wide, with the most significant declines over 30% and the biggest gain of almost 20%. 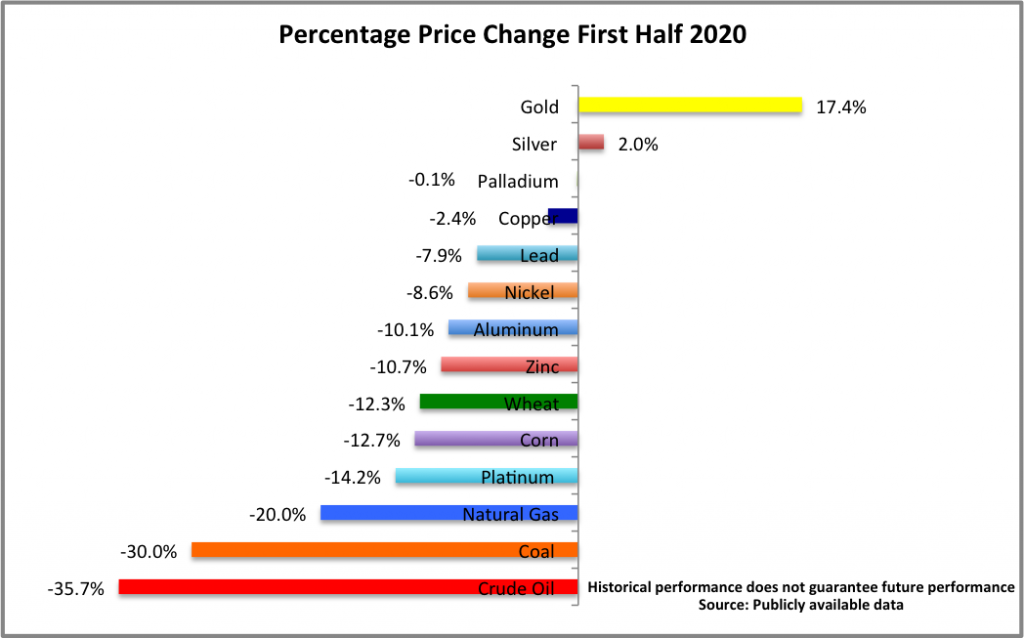 Gold and silver experienced rallies of 17.4% and 2%, respectively, as the demand for safe haven investments soared. Performance was further bolstered by the significant declines in interest rates, which left another safe-haven of choice, US government bonds, looking far less attractive than they have in the past. 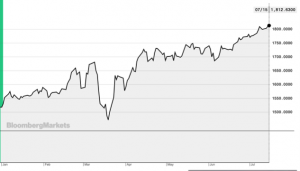 Gold reached its highest level in more than 17 years, reaching $1 800.50 an ounce by the end of June. Market analysts are confident, given the uncertainty still prevailing, that the precious metal has further to go, and Goldman Sachs predicts that it may reach $2 000 before the end of the year. 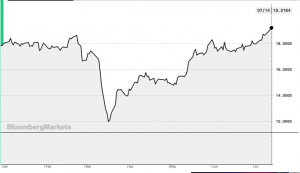 Silver managed to put in a positive performance for the first six months of the year, notwithstanding a steep sell-off in the first quarter that saw the metal price slide 21%. However, it regained all lost ground and more in the second quarter, as it rallied 31% over the three months. Silver tends to be more volatile than gold because it is the target of more speculative interest.

Base metals ride out the pandemic storm

Base metal prices were propelled higher by a multi-trillion dollar tide of stimulus spending announced by governments and central banks in March, which underpinned optimism that the spending would contribute to better economic performance, and potentially V-shaped recoveries, during the second half of the year.

During the first quarter, the onset of the pandemic and subsequent lockdowns saw demand for industrial metals dry up and prices plummet along with other assets, including the stock market, into bear market territory in late March. During the second quarter, however, base metal prices changed direction on the sharp decline in interest rates, which lowers the cost of carrying inventories, and the other stimulus measures, which supported industrial metals in general.

Copper, the best performing base metal, experienced a 20% sell-off during the first quarter and then made up most of that ground again when it underwent a 22% V-shaped recovery in the second quarter.

Tight copper supplies as a result of mine closures and disruptions, falling inventories, and a recovery in Chinese demand also propelled the base metal’s price higher. Copper prices increased to $6 000 when Codelco, the Chilean state-owned copper mining company, halted smelting at Chuquicamata and have since moved even higher, passing the $6 500 mark by mid-July.

Demand for electric cars has been taking off, with vehicle sales doubling in the first half of last year and United Nations Conference on Trade and Development (UNCTAD) expecting 23 million passenger vehicles to be produced by 2030. The shift away from fossil-fuel driven cars is likely to result in a shift in commodity markets, with the metals used in their production, lithium, cobalt, and nickel, to benefit.

However, the production of these metals is also concentrated in a few countries. UCTAD points out that nearly 50% of world cobalt reserves are in the Democratic Republic of the Congo (DRC), 58% of lithium reserves are in Chile, 80% of natural graphite reserves are in China, Brazil, and Turkey, while 75% of manganese reserves are in Australia, Brazil, South Africa, and Ukraine. The report notes that the susceptibility of the countries to political instability and potentially adverse environmental impacts raises concerns on how secure the supply of these raw materials will be for battery manufacturers. “Potential supply disruptions may lead to tighter markets, higher prices, and increased costs of car batteries,” says UNCTAD, “affecting the global transition to low-carbon electric mobility.”

A shift to more environmentally sensitive modes of transport, as well as renewable sources of energy, is already having a profound impact on crude oil prices. This year the COVID-19 pandemic dealt another harsh blow to the oil industry when already subdued demand disappeared as the economies were shut down.

Crude oil and coal were hardest hit for the period as a whole, losing 35% and 30% of their value, respectively. Natural gas also took a beating, declining 20% during the six months.

During the first half of the year, the bottom fell out of the oil market when crude oil prices plummeted in response to the oil price war that was set in motion when Saudi Arabia and Russia walked away from the OPEC negotiating table. WTI fell well below $20 a barrel in April before recovering as virus lockdowns eased, and Chinese demand picked up as the economy got going again. After its mid-April meltdown, the WTI has traded between $20 and $40 a barrel. However, it remains 36% below the $60-plus level it was trading at when the year started. 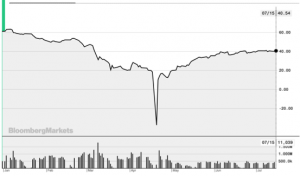 The recovery in oil prices in the second quarter following an OPEC agreement to cut back production significantly from May to July saw oil prices regain most of the ground lost in April. At the latest OPEC meeting, the members agreed to relax the production cuts by adding back 2 million barrels a day to the 9.7 million a day reductions. While OPEC expects demand to pick up, the risk of ongoing waves of infections in the US would hurt the oil price again.

A $40 a barrel oil price remains below the break-even price for most US shale producers, and thus production has been slowing as energy companies curtail production and net imports of crude oil rise again. The US elections are also expected to have a material long-term impact on the viability of domestic oil production. A Democratic win would be a negative for the industry as the party seeks to change the energy mix in favour of renewable energy options and a Republican win a positive, with Trump pledging to give the oil sector financial aid if he is reelected.

The natural gas industry also experienced the devastating impact of the pandemic, with Henry Hub, the US natural gas benchmark, falling to record lows in the first half of this year on a combination of a mild winter early in the year and the demand destruction wrought by the virus. The challenges faced by natural gas producers were challenging enough to result in the bankruptcy of Oklahoma-based Chesapeake Energy Corporation. 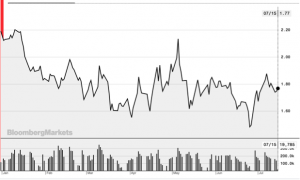 The Energy Information Administration (EIA) notes that the average monthly Henry Hub spot price during the first half of the year was $1.81 per million British thermal units (MMBtu and reached a low of $1.63 per MMBtu in June, a low last seen in 1989. The agency expects prices to recover later in 2020 on rising demand and declining production.

The Canadian oil and natural gas industries were also knocked by the demand setback of economic lockdowns, unstable commodity prices, and limited pipeline capacity. The US Energy Information Administration (EIA) predicts that production will only experience a partial recovery into the first half of 2021.

The severe conditions facing the industry are apparent in the decline in the rig count, which, in a normal year, according to the Canadian Energy Regulator (CER), would decline 85% to 90% from the winter peak to April/May lows, but has declined 98% this year. The four active rigs in production have also not begun their usual summer increase, says the CER.

Soft commodities, including wheat and corn, experienced double-digit declines of more than 12%. Soybean prices were undermined by increasing tensions between US-China, which were reignited by accusations that China had not been transparent enough about the health risks posed by the coronavirus.

After finally signing a long-awaited phase 1 trade deal earlier this year, relations between the two superpowers seemed set to improve. However, tensions flared up again as a result of various factors, including US President Donald Trump shifting the blame for the severity of the pandemic to China and disputes over China’s security crackdown on Hong Kong. As the elections draw closer, Trump’s hardline stance against the world’s second-largest economy is seen as forming an integral part of his reelection campaign.

The prospect of a Cold War between the two countries is clouding the outlook for the commodity markets, especially those where the fortunes of the two countries are interlinked as a result of their close trade ties. China is the US’s largest export destination for its soybeans and a variety of other agricultural products. A core component of the Phase 1 deal was China’s commitment to buy billions of goods from the US. While it has purchased goods, both the coronavirus and the conflict between the two have meant that it is unlikely that China will meet this commitment. Trump has also dismissed the possibility of a Phase 2 deal.

In early June, the Chinese government ordered state-run agricultural companies to halt soybean, cotton, and corn imports from the US in response to the escalating diplomatic tensions around the US response to the new national security legislation imposed on Hong Kong. 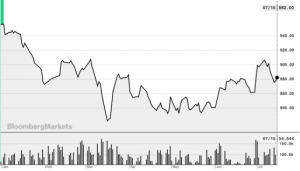 Political and trade relations between Canada and China have also been frosty after Canada complied with a US extradition request by arresting Huawei’s chief financial officer Meng Wanzhou in December 2018. The latest move by China was to accuse Canada’s timber producers of exporting timber with pests, a claim that many view as politically motivated.

As a result of the simmering tensions and the impact this has had on Chinese demand for Canadian-produced canola, farmers in Canada have been shifting the amount of canola they are producing to grain instead. According to Statistics Canada, canola acreage fell 0.8% to 20.8 million, a third annual decline, whereas durum wheat acreage increased 16% to 5.7 million.

The pandemic and the unprecedented impact it has had on demand for commodities this year so far has, and will continue to, determine the direction of commodity prices during the next six months. Nonetheless, it is important to take a longer-term view with investment decisions.

Although downside risks for most commodities are likely to remain elevated as long as infections continue to rise, economies can’t stay closed for much longer, given the profoundly damaging effect this will have on businesses and individuals. Thus governments will need to find ways to mitigate the virus while attempting to stimulate growth for as long as necessary to stabilize economies.