Commodities had a bumper first half of the year, gaining 21% and outpacing most asset classes across the globe.

Unlike last year, precious metals lagged on the leader board, the only commodities to put in negative performance during the first six months of 2021. Crude oil led the pack, gaining about 52% on tight supply and buoyant demand as economies reopened. With a 35% gain, corn saw the second largest price increases on smaller corn harvests and drought conditions in key growing regions in the US. Natural gas prices also soared as hot conditions increased demand for the commodity for cooling and export demand further bolstered prices. 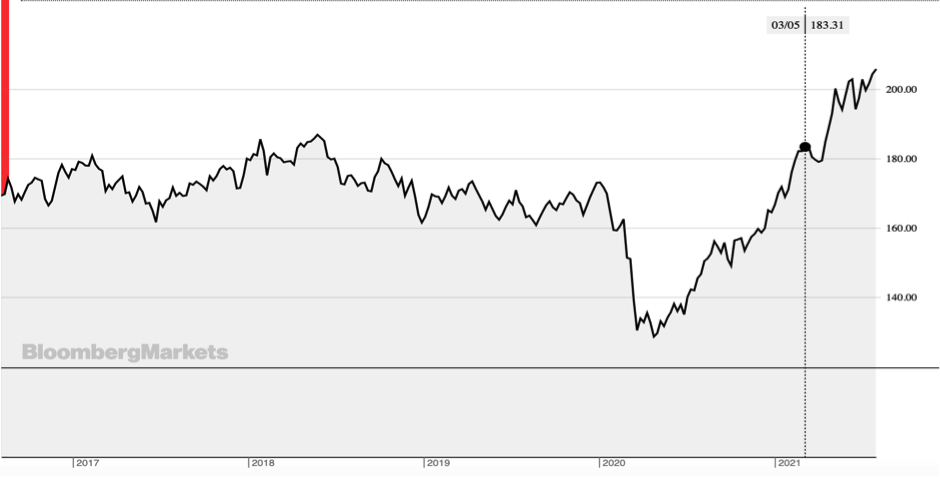 Crude oil dominated the news headlines as the black gold turned around its fortunes after trailing the other commodities last year. Prices have been boosted by fast-rising demand on the back of reopening of economies and a return to travel for many Americans in particular.

OPEC loosened the reins on oil production in late July, notwithstanding talks initially breaking down when the United Arab Emirates walked away from the negotiating table. Substantial oil price volatility ensued but after two weeks the members managed to reach a compromise. Saudi Arabia and UAE met in the middle, agreeing to monthly supply hikes of 400,000 barrels a day into 2022.

The West Texas Intermediate oil price dipped below $70 a barrel for a short period in mid-July before climbing back up to $73 – well above its sub-$50 a barrel level at the start of the year. With demand flourishing as economies return to some semblance of normality, crude oil is likely to continue to benefit.

During the first half the year, there was talk of oil prices heading for $100 a barrel. Factors that would stand in the way of such a prognosis would be a lifting of Iran sanctions, which would see the country add to the global crude oil supplies. Also, US shale producers could reinstate production should prices continue to rise, adding to a growing supply. 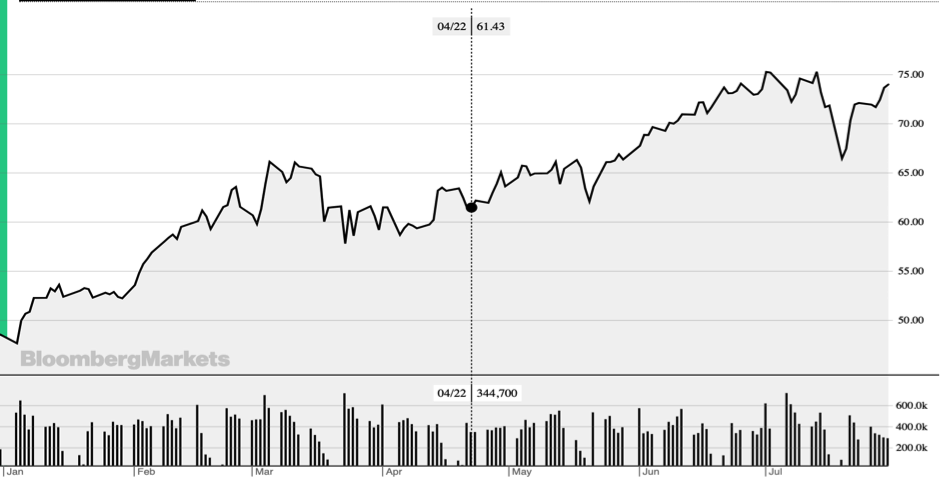 The biggest surprise in the first half of the year was the negative performance of gold and silver. The price of gold retraced 6%, trading below $1 900 an ounce since June, and that of silver trimmed 1% as the appetite for riskier assets has dominated. However, gold pundits believe the precious metal is now undervalued, particularly if worries about inflation materialize and investors are once again attracted to gold’s inflation hedge qualities. US Treasuries, the alternative safe haven asset, continue to trade well below 2% and thus are less attractive as a store of value in the face of a possible escalation in price pressures.

Government-backed infrastructure programs and demand for renewables have underpinned a substantial increase in base metal prices, with copper well ahead of the pack until May before it retraced some of the ground it gained before that.

China, which commands some 50% of global copper production, acted to stall soaring prices by reining in speculative demand by releasing state stocks of the metal and making it clear it would not tolerate excessive speculation. As a result copper price declined from a high of about $500 to below $420 before recovering to $460. Recent Chinese floods provided copper prices with another boost.

Year-to-date iron ore price increases have outpaced copper’s on strong Chinese demand as the world’s second largest economy has continued to grow at a healthy pace. However, there are signs that Chinese growth is likely to stabilize into the end of the year. 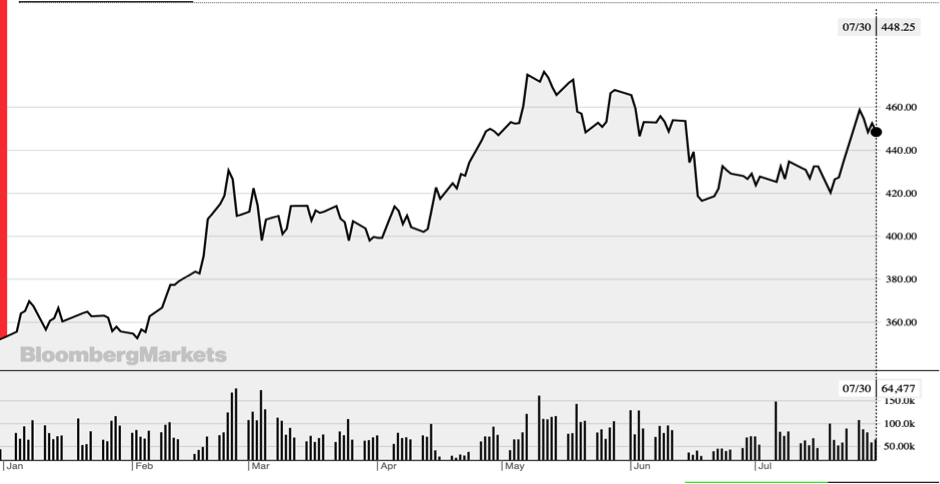 Lumber prices, which dominated the commodity news headlines, collapsed after making spectacular gains up until early May based on a housing and renovation boom during the pandemic based on stimulus checks.

Lumber futures peaked at above $1,600 per thousand board feet in early May. However, waning demand as prices soared, as well as increased production, saw the prices plunge. For the year, lumber prices are now almost a percentage point lower.

The US Federal Reserve has used the lumber price increases and their subsequent collapse as evidence of what can be expected when pandemic-related supply bottlenecks normalise – supporting its thesis that inflation is likely to prove transitory. 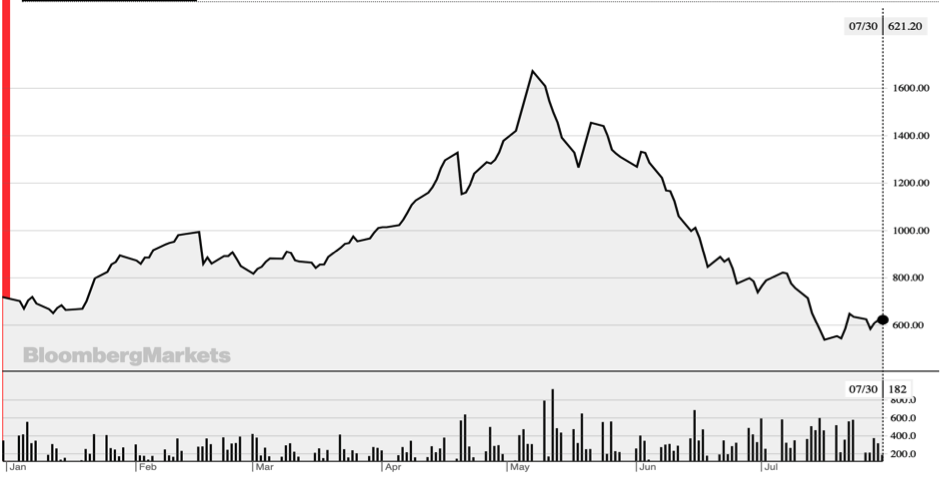 Natural gas prices have also rallied strongly this year so far, on the back of low supply, strong export demand and warm Northern hemisphere conditions that have seen increased natural gas consumption for electricity power.

As a result Henry Hub forward contracts are trading at above $4/MMBtu for the March 2022 and AECO’s cash prices are close to US$3.30/MMBtu. S&P Global Platts Analytics says these elevated price levels will put producers’ commitments to disciplined capital expenditures and low, steady production growth to the test. It also forecasts that Canadian gas production will grow 600 MMcf/d winter over winter based on producers plans laid out earlier in 2021. 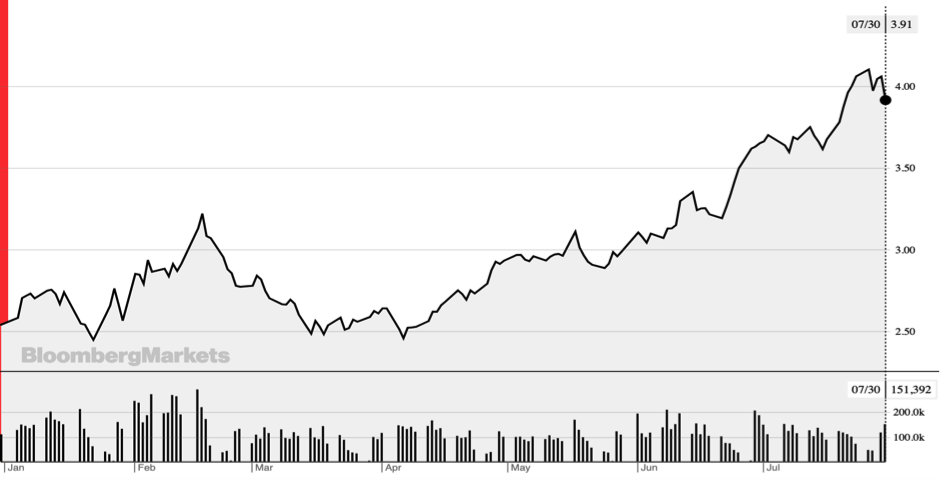 Corn and soybean prices have come under pressure due to ample supplies and an unexpected slowdown in Chinese demand. Forecasts of cooler weather for August in the US Midwest hasn’t helped. Corn prices declined to a low of $517 a bushel during July before recovering to $544 by the end of the month – still higher than the $484 it traded coming into the New Year. Soybeans fell to $1305 per bushel in early July before recovering to $1345. Year to date corn prices are 12.4% ahead and soybeans 2.6% higher. 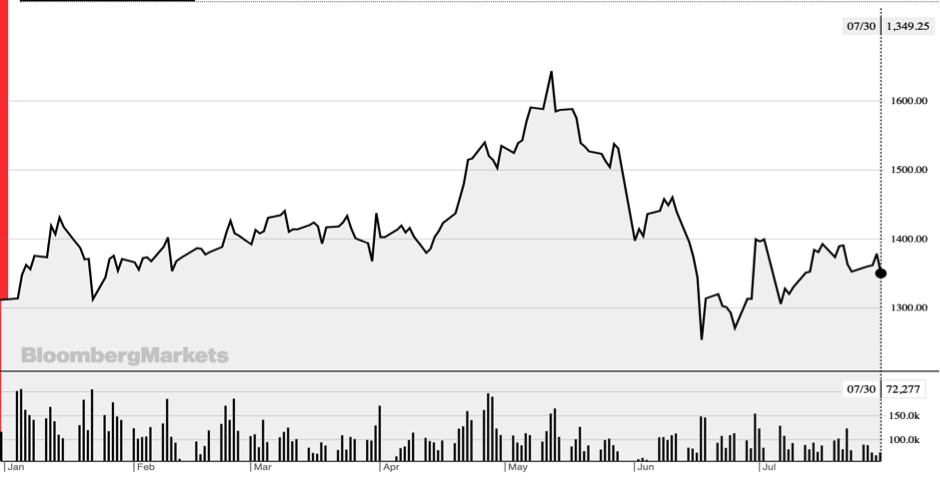 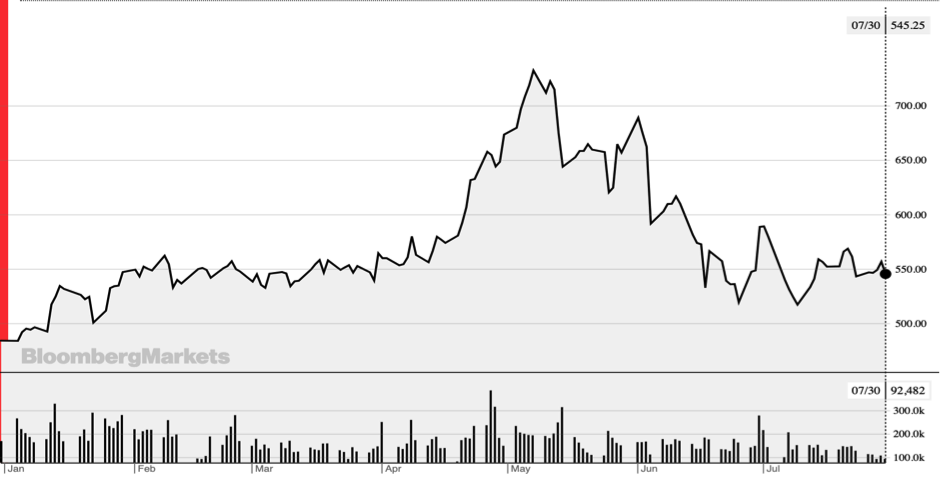 A sustained rise in commodity prices this year will be dependent on the impact the delta variant has on the global economy for the rest of the year. So far global growth is holding up, though divergent, with developed economies faring well and emerging markets less so. Tensions between China and the US also threaten to cast a pall over global trade. However, as it stands, the commodities market is unlikely to experience the sea change experienced during the first half versus last year as we head towards the end of the year.